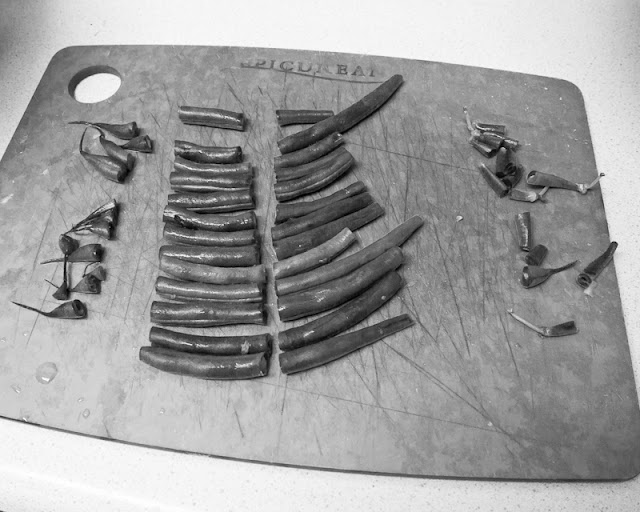 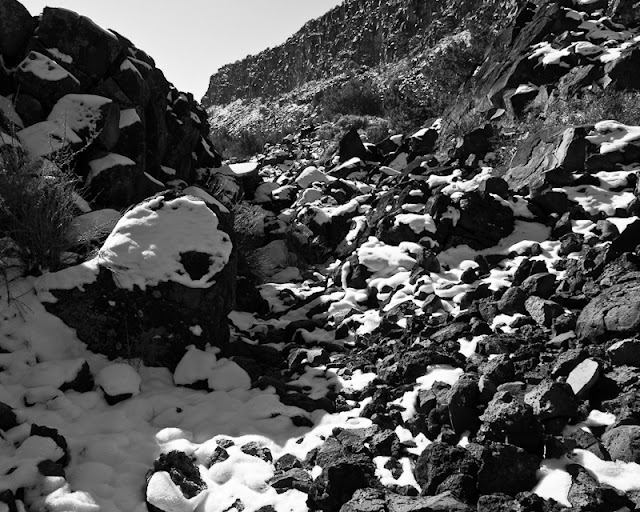 This photo was made on a White Rock Canyon hike back in December with Matt, Amanda, and Penelope. This boulder pit is directly off the Red Dot Trail.
Posted by Reid at 12:00 PM No comments: 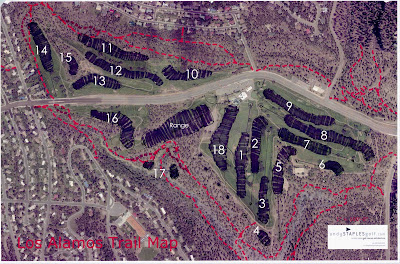 After several weeks off, the golf course issue is back again — there are a couple of public meetings soon, one on Wednesday for the Parks & Rec Board to consider the proposals, and another for the Capital Improvements Board to consider them (the final step before the County Council).

Anyway, you may recall that my initial position was that we shouldn’t cut down any trees at all to accommodate a golf course project. After being pretty thoroughly involved in the process, and talking with forest people as well as Andy Staples, the golf course architect, and seeing the new options emerge, I’ve changed my mind.

Specifically, I believe that people like myself who care a lot about forests and trails, and who do not care at all about golf, should nevertheless support Option 2. This option gives up a few acres of trees and puts golf on the rim of a canyon which right now is moderately secluded — which I don’t like, but I think supporting this option has more benefits than drawbacks.

Specifically, those benefits are: (a) it would make golfers much happier than Option 1 or leaving the layout unchanged, which means it would be a long-term solution and we won’t be having this same conversation again in 10 years, and (b) it builds political capital that will be valuable in seeking broader open space protections across the county (and conversely, opposing the project destroys political capital that we need). Also, we still get item B even if the plan fails!

You might ask: “Don’t we already have good de facto protection of open space in the county? And isn’t public opposition such that we can be fairly confident of blocking future development proposals?” The answers turn out to be no and no. For example, here are some development proposals from the past 20 years (compiled by Craig Martin, who is awesome; this list is an edited quote from his post in the Los Alamos Trails Facebook group):
Each of these required a great deal of effort to oppose, with some successes and some failures. The point being: much of the open space we know and love in Los Alamos has zero legal protection and is at genuine risk of development.

Opposing what is a modest expansion, compared to what golfers would choose if they had their druthers, makes us look selfish and inflexible, given that the golf course is also open space (a lesser form of open space, in my opinion, but open space nonetheless). Previous efforts to build comprehensive open space protection have failed for exactly this reason.

Finally, I don’t have concerns about the cost of the project, especially since Option 2 is not much more expensive than Option 1: if one will fail on a cost basis, both will. We can afford it, quality infrastructure costs money, and it’s really decades of deferred maintenance, not a fancy new facility.

For these reasons, I believe we should support Option 2 and take advantage of the momentum this process has generated to create comprehensive protection for open space in Los Alamos County.
Posted by Reid at 9:30 PM No comments:

Last Monday, Erin and I hiked from Ponderosa Campground to the rim of Frijoles Canyon, an area with significant damage from the Las Conchas fire. 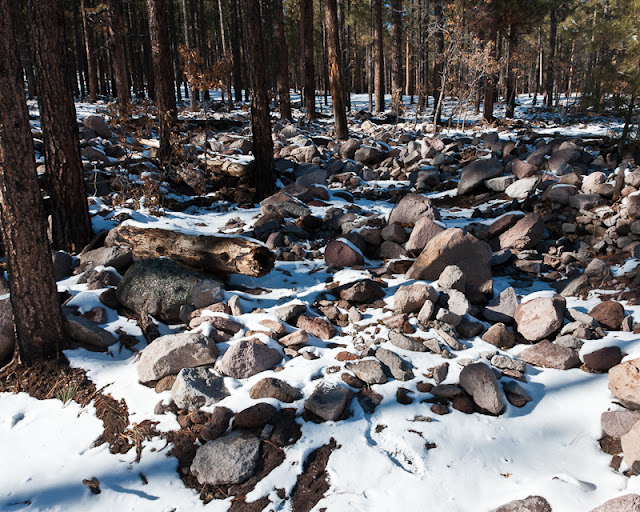 This wash contained a large amount of rubble spread across a wide area. 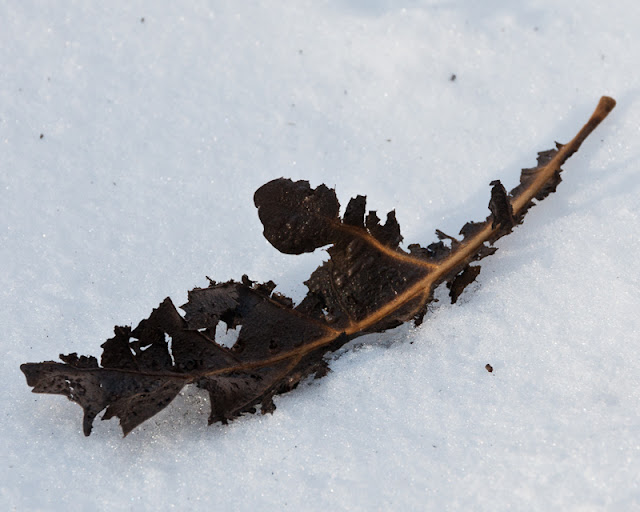 A charred leaf which had drifted down onto the previous night’s snow. 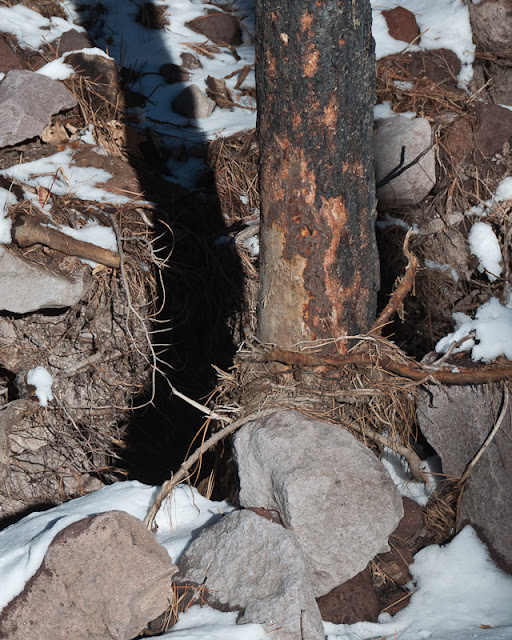 This snag’s bark had been stripped off on the upstream side by flood water and debris flow. 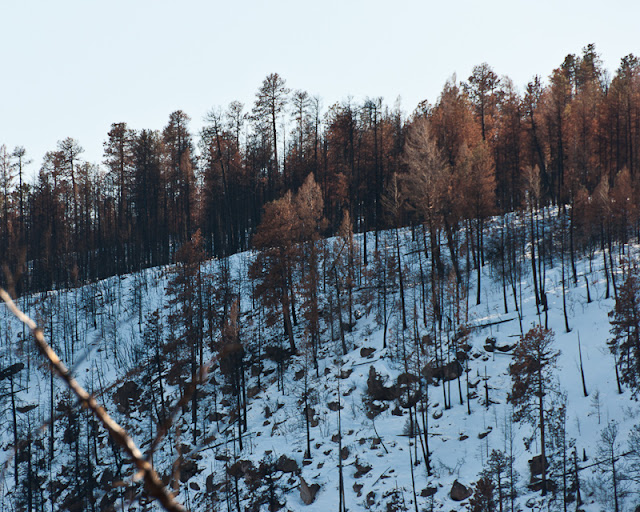 Charred trees on the far side of Frijoles Canyon. 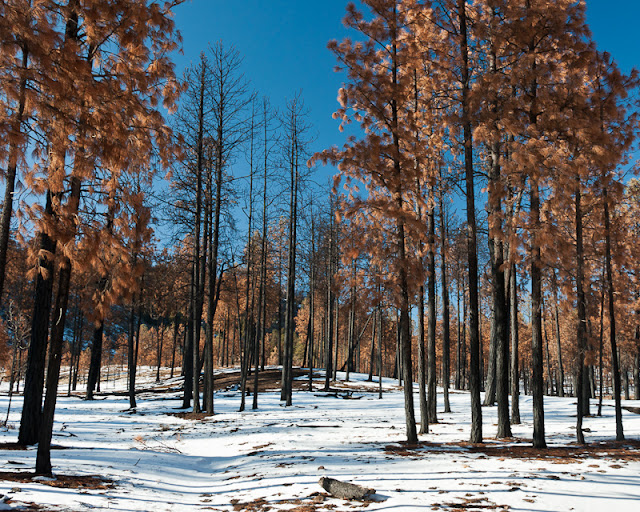 Ponderosa grove not far from the rim. 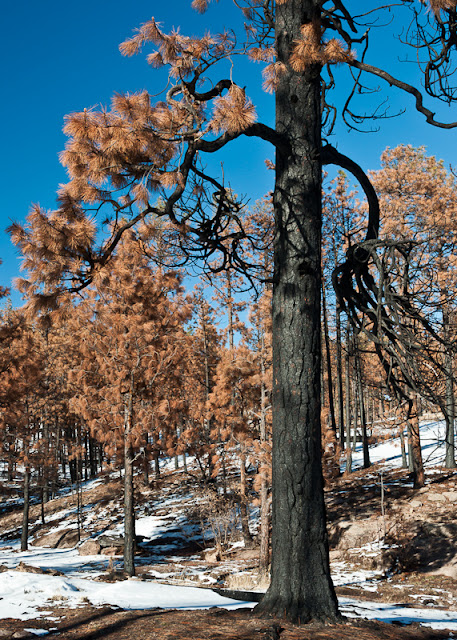 A large ponderosa killed by the fire.
Posted by Reid at 12:00 PM No comments:

Flowers from the archive

These flowers were growing down the street from our Cambridge house last August, some in beds and others out of cracks in the cement. I though they were pretty remarkable looking but hadn’t put them on the blog yet. 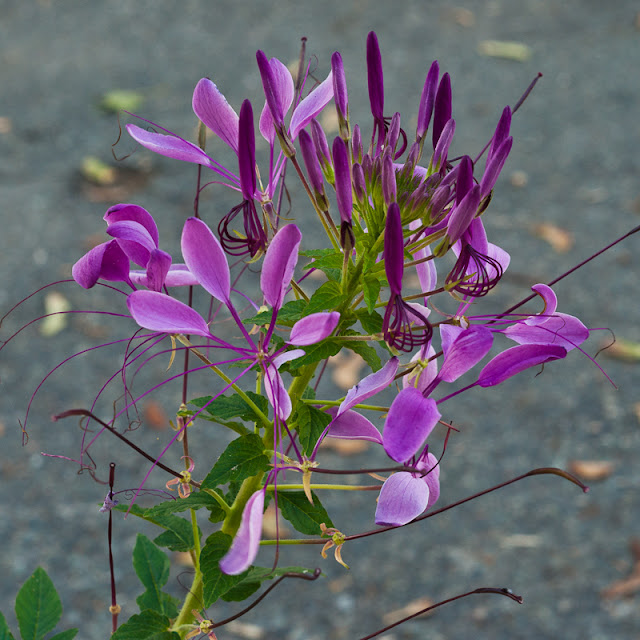 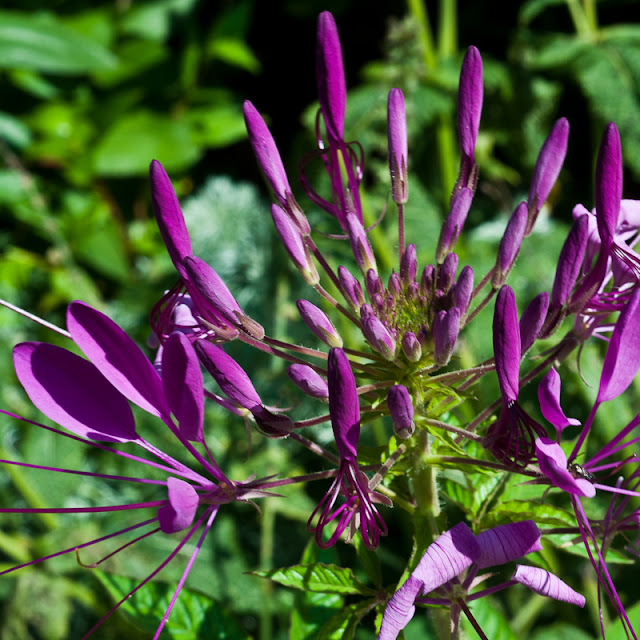 On Friday, Erin and I walked down “Gonzalez Canyon” just north of Camino de Encantado on Barranca Mesa. We wanted to check out an apparent road bed that we had seen from across the canyon. 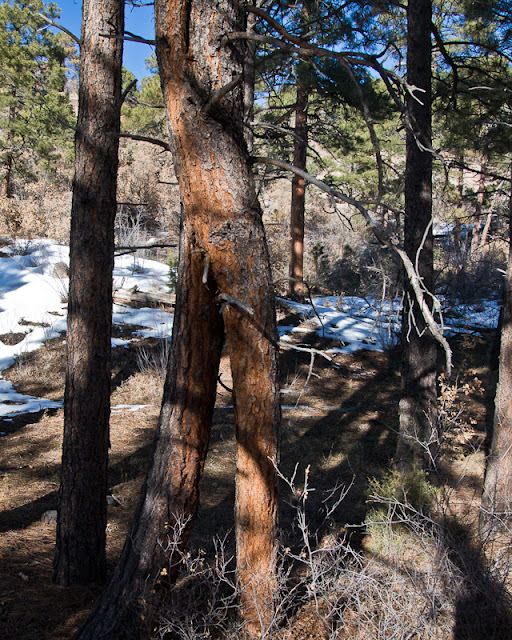 There are lots of “character trees” around Los Alamos, but this one really caught my eye. It is two independent trunks emerging from the ground, apparently merging, and then splitting again. 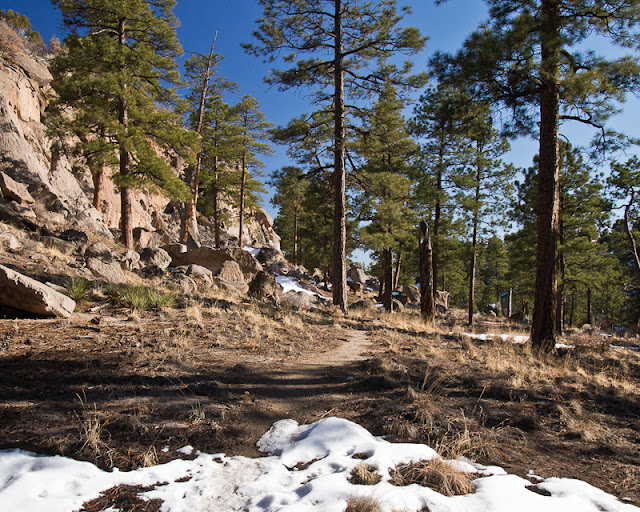 Trail on the north side of Gonzales Canyon. 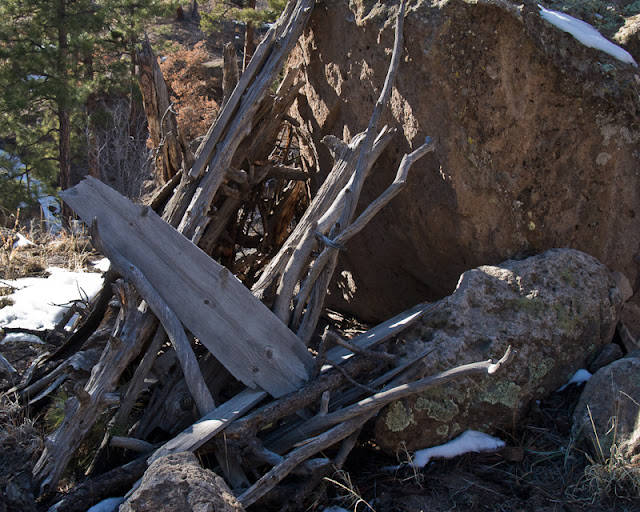 Forts are awesome. I had a great time playing in forts in the woods when I was a kid. I’ve heard rumor that some folks want to prevent kids from building forts in the woods, to keep them pristine. That seems like a terrible idea to me — IMO a great way to build a love of the outdoors in children is to let them do childish things outside. 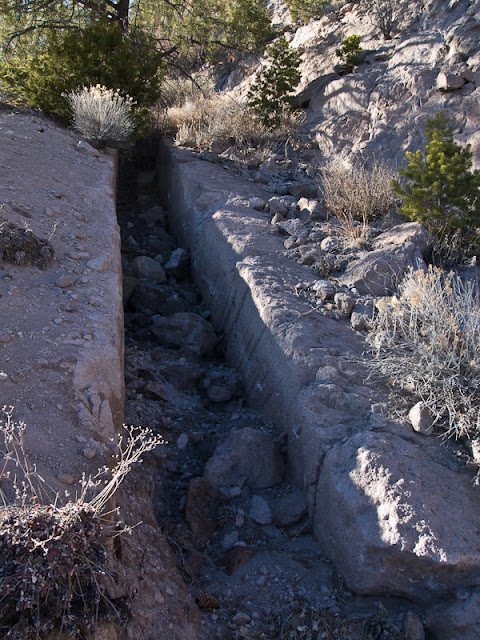 We weren’t exactly sure what to make of the “road bed”. It seemed too steep to be a road, yet too wide and too enthusiastically cut from the hillside to be just for a pipeline. (I don’t know if there’s anything in this particular trench, but lower down there was a manhole cover with running water inside.) 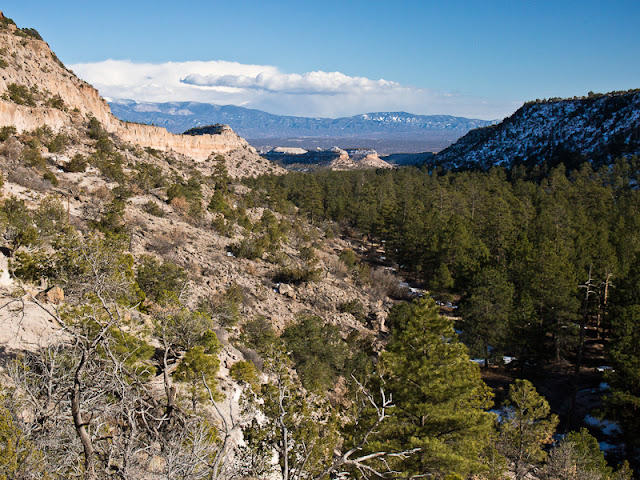 Looking toward the Sangres from just south of Los Pueblos.

Keep in mind this is the middle of town, folks. I still can’t get over that.
Posted by Reid at 12:00 PM No comments:

My granny is awesome

Last weekend, I was in Seattle for a conference and had time to visit my granny, who is awesome. 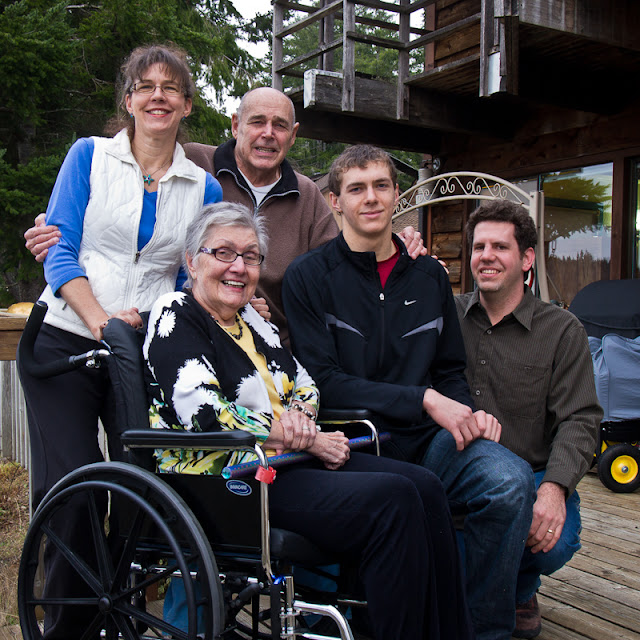 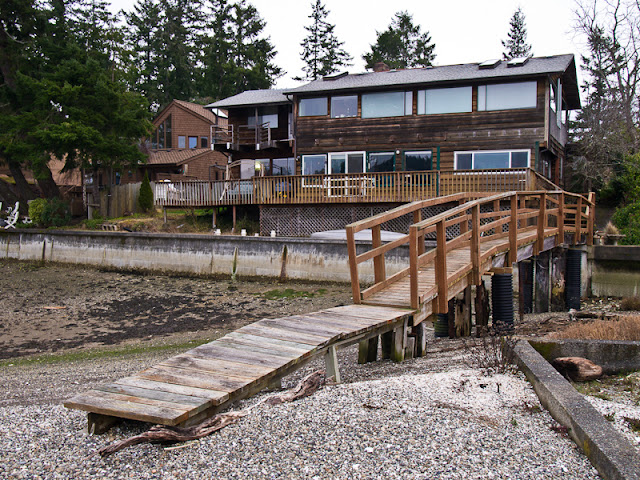 The “beach house”, where I spent lots of happy time during my childhood. When Granny and Papa bought it, it was a tiny cottage, and Papa built it up into a cool house with all kinds of bizarre nooks and crannies. 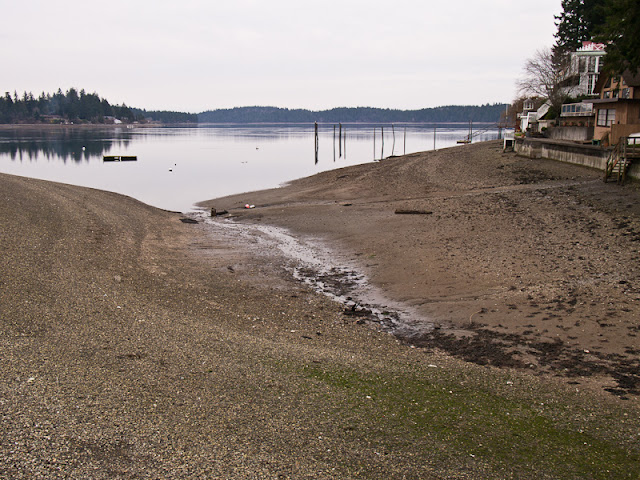 Puget Sound has very big tides. I spent a lot of time playing in the mud in this inlet (in front of the beach house); a favorite activity was to start building a dam as soon as the tide passed the dam site on the way out, with the hopes of making it large enough to hold back the water when the tide came back in.

Also, after returning from a wedding, I apparently walked straight through the house and began playing in the mud, without taking off my tiny suit.

Another blog, OMG! And this one needs your help 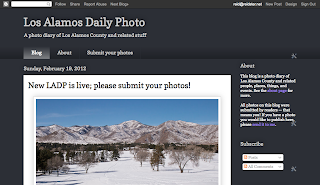 I’m launching (or really re-launching — I took over earlier this month) another blog. This one is called Los Alamos Daily Photo and it’s a collaborative photo diary of Los Alamos related places, people, things, events, and whatever else you can think of. Please send me your photos! (Instructions over at LADP.)
Posted by Reid at 6:50 PM No comments:

Today's weather forecast. Note particularly "chance of precipitation" for today and tomorrow versus the "Regional Forecast". There is also a Winter Weather Advisory that I have not shown.

This dissonance happens all the time. 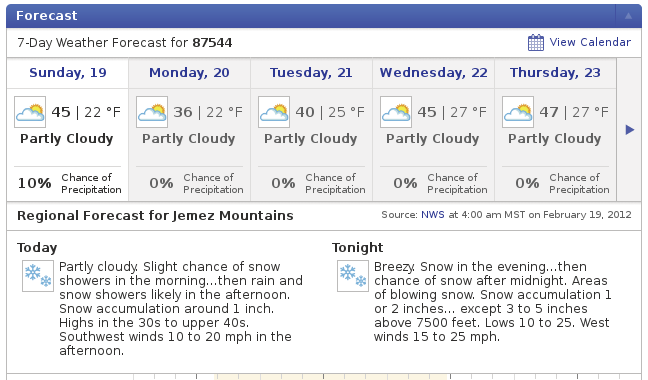