As mentioned earlier, one of my photos won an honorable mention in a local photo contest. Today was the awards event.

Here's me with my photo: 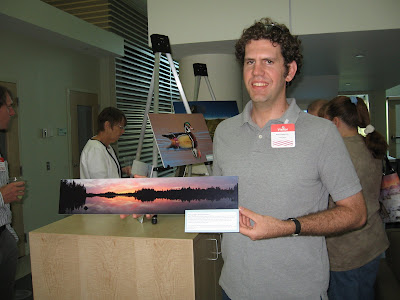 I wasn't all that excited by the event itself. There was mingling for an hour, which Erin and I don't really enjoy and aren't too good at, though I did talk to a couple of folks from Friends of the Boundary Waters who were very impressed by my photo.

This was followed by an awards ceremony which was about 30% clapping and 50% giving fundraising awards to organizations participating in the MEF (sponsor of the contest) fund drive. I got a certificate and the foam-core print, which is pretty nice but is on plain paper.

The winning photos are online (and all look much better onscreen than on paper). Apparently, I was the 2nd honorable mention. Of the photos ahead of mine, I thought the 1st and 2nd place winners, and the 1st honorable mention, were very strong. I thought the 3rd-place winner was also very strong except for a severe composition error (a man's head aligns perfectly with the horizon, which looks weird) which IMO should have nixed it.

Also, Erin took a photo on our most recent BWCAW trip which I thought was simply extraordinary and which I believe to be a shoo-in winner next year.

Finally, here is our cat in a box: 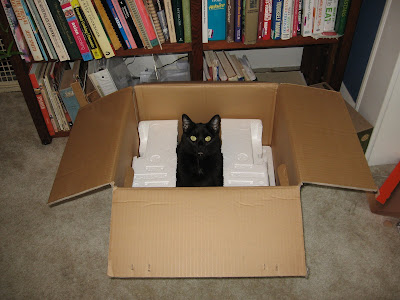