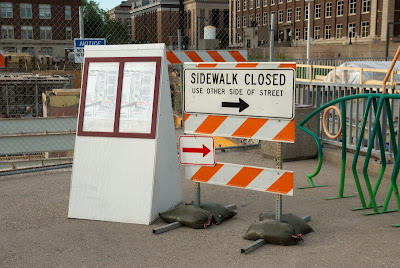 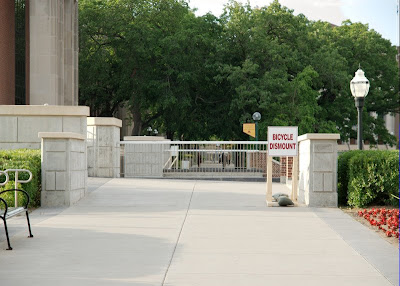 I wrote a letter to the editor of the Minnesota Daily about the above situation, and they ran it, yay! I'm reprinting it here too:

With the closure of the Kolthoff Hall sidewalk and the walk-only restrictions on the western silver bridge, it is once again impossible to safely get from the Washington Ave bridge to north of Washington on a bicycle. I find it hard to believe that the University consulted with any cyclists on closing the silver bridge, as it is unnecessary and focuses cycle traffic into the Washington/Church intersection, thus creating a dangerous concentration of bicycle, pedestrian, and motor vehicle traffic on the southwest corner of the intersection.

1. Replace the "Bicycles Dismount" signs on the silver bridge with a 5MPH speed limit. There is plenty of room for cyclists and pedestrians to coexist on that bridge in light summer traffic, and a 5MPH speed limit would allow ticketing of reckless cyclists (who are the real motivation for the closing, I would assume).

I realize that construction is disruptive, and we need to share the burden. But forcing major disruption on cyclists while while other modes are largely unaffected is not sharing.