Where should Los Alamos put a bike park?

Los Alamos County has decided to spend a little bit of money on developing a master trails plan. As part of this, I attended a small working group (10 people including Craig and the two consultants) on Tuesday night.

There’s a lot to say about our open space, of course, and I have another post in the works on general issues raised at the meeting and elsewhere. For now, what I’d like to talk about is narrow: one of the proposals on the table is a “family bike park” along the lines of Valmont Bike Park in Boulder, CO (but much smaller — more like 7-12 acres instead of 40).

In principle, I’m not terribly excited by this idea, simply because I don’t do that type of cycling, though I don’t find it fundamentally objectionable and can understand how it would appeal to some folks. I do think that other stuff (e.g., trail access easements) is a higher budget priority, but as part of a master plan, sure.

One thing that does concern me is location. The leading proposal at the meeting was the site of the old sewer treatment plant in Pueblo Canyon (outlines in this post drawn by me): 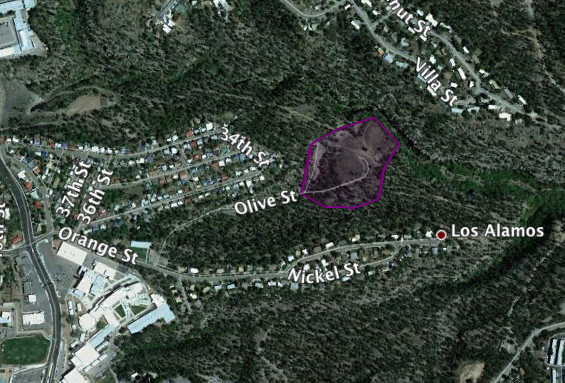 I was quite skeptical of this location at the meeting, and after visiting today, it seems like an even worse idea. That is, very few towns have the internal open space that we do (the notation “Los Alamos” above is the center of town, according to Google); our internal canyons and forests are an extraordinary thing that ought to be protected. And Pueblo Canyon is the heart of this.

Accordingly, the location above is not the place for a boisterous bike park where lots of people gather regularly. Also, this location would draw vehicle traffic down a secluded canyon (Olive Street is currently closed to vehicles, aside from the utilities department, which is a separate issue).

There seemed to be some sense at the meeting that the site is essentially a brownfield, already severely impacted and thus appropriate for development. I don’t believe this is so. There is indeed an unsightly dirt parking lot and a large weedy field. What I think we should do is replant the parking lot and roads with ponderosa and the field with native grasses (the closest meadows are on North Mesa, which is in a different ecosystem). I suspect ample volunteer labor would be available for this sort of thing.

Anyway, I simply can’t support developing a bike park at the above location.

The trail consultants tell me that an ideal site would be “a relatively flat area with shade, water, proximity to the current trail network, parking, and easy access for kids” and “close to town but not too close to neighbors”. A minimum size would be 7-12 acres (the area above is about 10) with 20 parking stalls. That’s a tall order in space-constrained Los Alamos, but I have a couple of suggestions which I believe more or less meet these requirements: 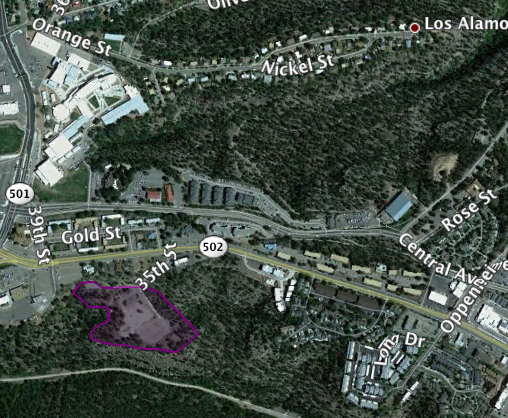 This is roughly 8.5+ acres south of Trinity Drive. It’s closer to downtown than the sewer plant site, and it really is a brownfield: as you can see above, it’s a large parking lot with a dirt patch in the middle.

Access to the existing trails network is a little harder: somehow, you have to get across Trinity (4 lanes, 35+ MPH) and Canyon Road (not as hard). We could add some ped/bike signals, or even drill a 700ft tunnel over to Pueblo Canyon. :)

However, it has good access in principle to the Los Alamos Canyon bottom, which goes places. Negotiations with DOE are required to make this work, but I think the odds are good for an eventual trail down the canyon from the townsite to the White Rock Y (a lot of this already exists), and if one can get upstream just a couple of hundred yards, one can access the existing Perimeter Trail. Also, the site connects to a potential future Canyon Rim Trail leading to downtown and beyond on pavement — i.e., the site may be better future-proofed than the sewer plant site. 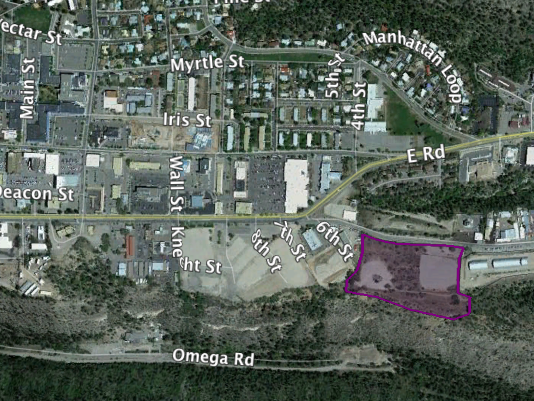 I haven’t spent much time down on DP Road, and it’s got weird issues like being in the process of lab cleanup. I’m also told that it’s “zoned commercial and the county intends to use it for light industrial purposes”, but I think it’s worth considering despite that — if we decide that it’s the right spot for a bike park, then it should be a simple matter to re-zone it.

Anyway, I don’t know anything about the above 11-acre parcel other than it seems blank on Google Earth. It’s close to a near-term extension of the Canyon Rim trail and has decent access to downtown and the trails beyond via Central Ave; also one can get to the somewhat airy Pueblo Canyon Rim Trail by crossing Trinity, and perhaps potentially go down the hill to Los Alamos Canyon bottom.
Posted by Reid at 10:19 PM