The election was called for Senator (now President-Elect) Obama almost exactly 72 hours ago. I hosted an election-night party with map & charts. Here's photos, as things were at the end of the night, and some additional thoughts with another three days of perspective. 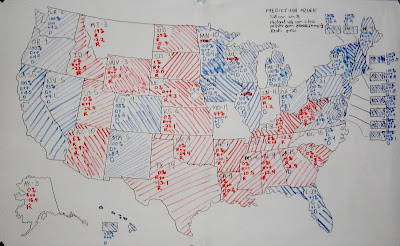 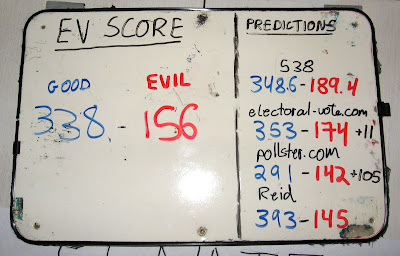 It looks pretty well wrapped up. Indiana (home state of my lovely FW, yay!) and North Carolina has since been called for Obama, Montana for McCain. Missouri will probably go McCain. The fun thing is that Nebraska will split its electoral votes, the first time that this has ever happened (Nebraska and Maine are the only states that aren't winner-takes-all). Voters in Nebraska's 2nd Congressional District (Omaha) will send one elector to vote for Barack Obama. 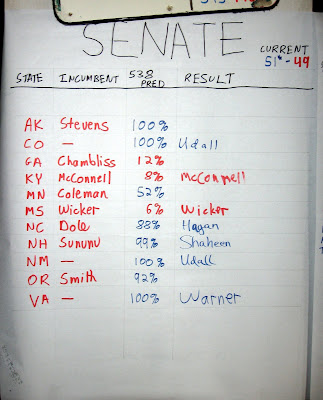 Races not resolved in the photo:
Democrats will flip at least 6 seats and Republicans none, for a 57-seat Democratic majority at minimum (counting Sanders and Lieberman, Lieberman's risk of being thrown out of the caucus notwithstanding). There's a lot being said about a 60-seat filibuster-proof majority, but in reality cloture votes rarely go along party lines. The power of Republicans to be obstructionist is much, much diminished even if they retain all three seats still unresolved. 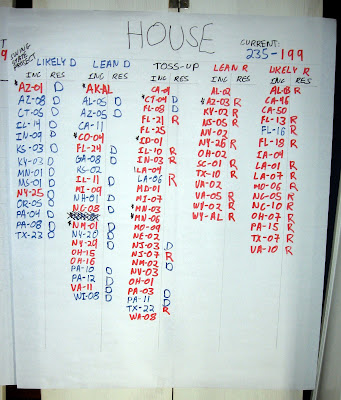 There are a few races still uncalled, but the new House stands at 255-174 so far, with Democrats netting at least 20 seats. Highlights:

Everyone and everything I endorsed won, with the exception of the yet-to-be-resolved Coleman-Franken race. Wow! That doesn't happen to me very often.
Posted by Reid at 9:35 PM