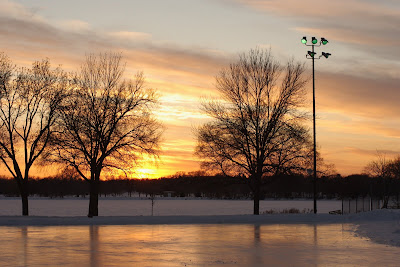 This afternoon I wandered through the neighborhood for an hour or so with my 50mm SMC Takumar. This is down at the seasonal ice rink adjacent to Lake Hiawatha (which is the big flat area in the background).

Right at sunset the floodlights suddenly began to buzz and tinkle -- I was worried that the light would be totally ruined. And it was, but it took a while for the floods to warm up, and for about a minute or so they were a really cool subtle blue-green. This is the in-camera JPEG, and I think there's definitely more to these images in the RAW.

Also, it was freaking cold. I took my tripod but it turns out I wasn't willing to mess with it at zero degrees F.


In other news, one of my more bizarre hobbies is shoveling snow. This afternoon (it was about 10 at the time) I cleared the packed snow and glare ice from the sidewalks of about 5 neighbors who, shall we say, aren't as diligent about snow removal. I thought about taking some before/after images, but I think said neighbors think it's weird enough that I'm clearing their sidewalks, and taking photos of same might be a bit much.

Also, I thought that it would be very hard to do this at 20 degrees below freezing, but my ice chopper worked very well and quickly. I wonder if the ice is more brittle when it's colder, and that's why?