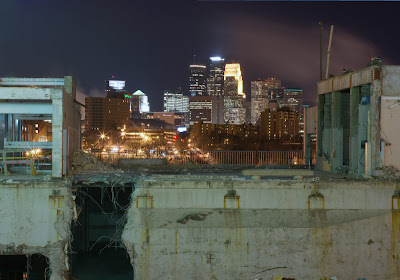 You may be sick of photos of the Science Classroom Building, but here's another one anyway. Same viewpoint as the last one, different (and nicer) lens.

They seem to have hauled away much of the framing and are now jackhammering away the concrete. This building is attached to the Washington Avenue Bridge, which is covered on the pedestrian level. This means that as you cross from west to east during the day, you basically go down a tunnel of hammering and shaking that gets louder and louder. It's rather disconcerting, particularly since the bridge is partially closed due to structural problems.

I submitted this photo to the PentaxForums.com monthly photo contest. I don't expect to win (and in fact it would be a little sad if I did), but it would be nice to get a few votes and not come in last. We'll see; voting opens on February 1.