Wednesday morning, I woke up to a huge e-mail inbox. Both my inbox and my spam folder were clogged with thousands of unwanted e-mails, and the mail system (I run my own e-mail server) was groaning under the load.

What happened? "Backscatter". Someone had sent off a big load of spam with my e-mail as the return address, so I got all the bounces from the misconfigured servers out there that believed I'd really sent the junk -- 15,000-20,000 of them, I think.

So... I spend the morning cleaning up this garbage. I had to disconnect my mail server from the Internet (to stop the continued flood), and disable my spam detection (SpamAssassin) because that seemed to be a bottleneck.

One of the related problems was that if placing an e-mail in my inbox failed (which may did because the system was so clogged up), that would cause ANOTHER e-mail to be sent to me notifying me of the problem... sigh.

Here's a screenshot of Thunderbird in the middle of the mess. I had already sorted through maybe half of the unwanted mails. 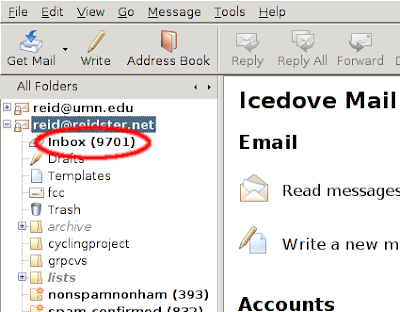 Anyway... bottom line, it was a crummy morning. Lessons learned: