I had thought the mushrooms were over -- declining yield, a failed flush, and then the sawdust block they're growing on was crushed.

But after waiting a rather long while (most other flushes had begun to emerge within 1-3 days), I got a flush. Here's the result. 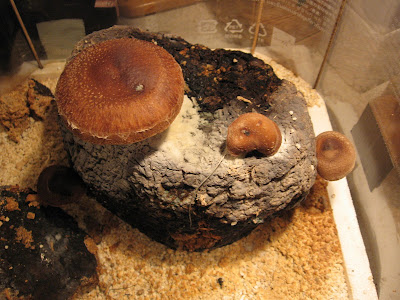 The yield: 1oz. Not much, but infinity percent more than I was expecting.

On the suggestion of my friend Aaron, I began regulating humidity using dampened perlite. This is highly effective; humidity hovered around 85-90% with no spritzing, ever. Yay.

There were some fruit flies in the terrarium, which is kind of yucky. I hope that this can be avoided in the future.

Aaron has also promised me some oyster mushroom spawn soon. These grow on coffee grounds so I'm looking forward to that. Maybe they will be less finicky than the shiitake.

So, I'm going to continue with this shiitake block. I'll have to think up something to support the falling-apart sawdust block.
Posted by Reid at 9:11 PM