Here's one of the most moving Obama photos I've come across this campaign: 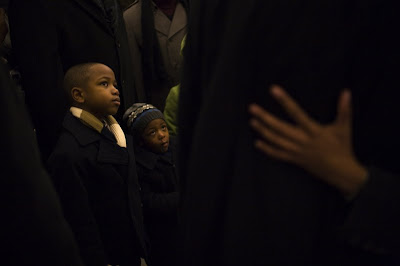 The image is by Callie Shell, and there are lots more extraordinary photos from the campaign trail at her website. The caption reads:


These two boys waited as a long line of adults greeted Senator Obama before a rally on Martin Luther King Day in Columbia, S.C. They never took their eyes off of him. Their grandmother told me, "Our young men have waited a long time to have someone to look up to, to make them believe Dr. King's words can be true for them." Jan. 21, 2008.

(One in nine black men between the ages of 18 and 34 are currently behind bars. That's appalling and shows a total failure by all of us, collectively.)


In other news, I spent a few hours door-knocking for Obama's final-days get-out-the-vote effort. This task is not for me; I found it extremely difficult and emotionally draining, and this is in a heavily Democratic area (79% for Kerry in 2004). I don't think I'll be doing it again; it's just not me.

My respect and gratitude to those who do this day after day. I know that many people have different personality types and don't find it as difficult, but still.

One cool thing was that I got to meet Mayor Rybak and Jim Davnie, my state House Representative. Now, in a district like mine, Davnie is extremely safe. I asked him about this (he is actively campaigning even though he could probably win doing nothing) and was quite impressed by his answer: "The people deserve a race." Jim Davnie is a good man, and you should vote for him.
Posted by Reid at 8:47 PM

New comments are not allowed.