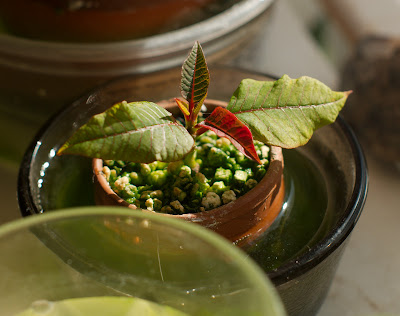 For some years I've had a poinsettia given to me by an ex-girlfriend (who was a girlfriend at the time). It didn't work out and for good reasons, but I like keeping the plant around because it does have sentimental value. However, it's a finicky plant and likes to drop a bunch of leaves at the slightest flaw in nurturing, so it had become extremely leggy.

Erin's wanted to chop it off and start over for some time, and we'd taken a cutting which hasn't died but stubbornly refuses to root, so I didn't let her do it. However, a few weeks ago, there was some minor abuse and pretty much all the leaves came flying off. It looked to be on its last legs so we took a few cuttings and did the chop.

This is one of the cuttings. It's decided to "bloom". Weird.

If you are bored, you can look up the List of poinsettia diseases on Wikipedia.

I also like that Erin isn't threatened by this memento, another reason I'm glad I'm marrying her and not the other one. ;)