Greater Boston has a signage problem

Quick, what the hell does this traffic sign mean? 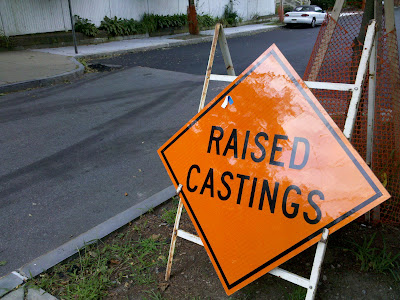 One of the infrastructure things greater Boston totally does not get right is street signs. For example, you might think, given the fact that the street network is an insane tangle left over from a variety of historical baggage, good street-name signs might be a priority. They are not. Such signs are frequently missing, hidden, and/or oriented incorrectly.

Anyway, the above sign marks a street where the top layer(s) of asphalt have not yet been laid down, but the manhole frames (which are of cast metal, I assume) have been installed. Since said frames are level with the complete street, on the incomplete street they stick up a few inches. I assume “castings” is a jargon term. It is a bit depressing that whoever approved these signs did not empathize with the average driver before doing so.
Posted by Reid at 9:13 PM