Update 1/26: Craig learned some more concrete information about the plan details, which makes some of the content below a little misleading. I’ve added a few updates in-line.

The golf course improvement/expansion project continues. The result of the meetings two weeks ago is two new options (the previous lettered options are now off the table). Below are sketch maps of the new options, my comments, and some photos from a tour of the potentially impacted areas led by Craig Martin earlier today. 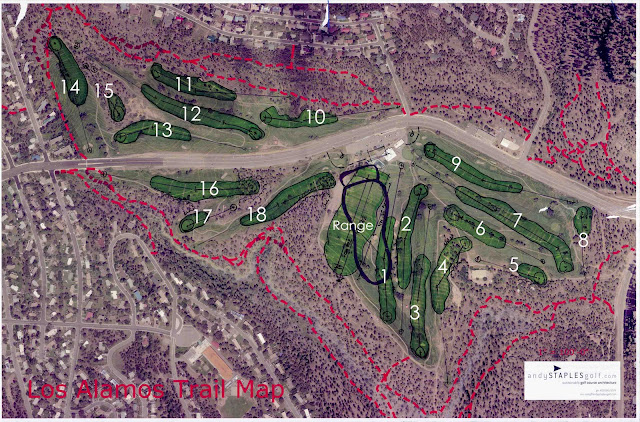 This option more or less rebuilds the course in place. Details matter, of course — there is some encroachment into the forest, both along the edges and into interior islands (for example, I worry about holes 4, 11, 15, and 16). But assuming the above accurately represents the actual tree loss, I could probably live with this.

The problem with this one is that it seems to have limited appeal to golfers, as far as I can tell. So if we do this, will we be having exactly the same discussion in ten years? I think everyone is much better served if we can come up with a true long-term solution. (Of course, if golfers are dissatisfied because it’s only a great community course rather than a “destination”, then I have pretty much no sympathy.) 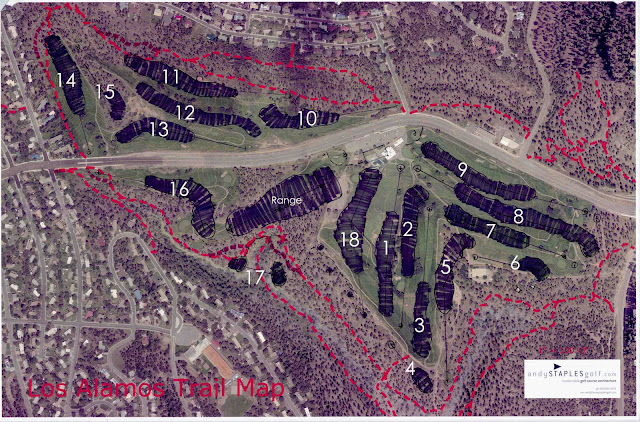 This option has similar encroachment as Option 1, with two significant exceptions: Holes 4 and especially 17. Considered independently, this option is not acceptable. There is too much tree loss (we’ve just confirmed that some of these trees are 350 years old), and it totally changes the character of a secluded and remarkable viewpoint.

The upside is that the golfers seem to like this one. While Option 2 alone I could never support (simply reducing one’s demands is not a compromise; a true compromise has something in it for both sides), I believe we might make something of it. I do believe there’s a lot of value in an outcome that both sides are genuinely happy with, rather than an outcome which one side only grudgingly accepts. More on this later.

Earlier today, Craig Martin generously led a tour of Option 2’s holes 17 and 4 to show folks what the impact on the ground might be. Unfortunately, all we had to go on was sketches like the ones above, so we had to do a fair amount of guessing. And there’s another layer of interpretation in my own descriptions below, so please don’t assume these are definitive.

Craig and his wife June spend a few hours flagging and staking before we arrived. Thus, you can go independently and check things out for yourself. 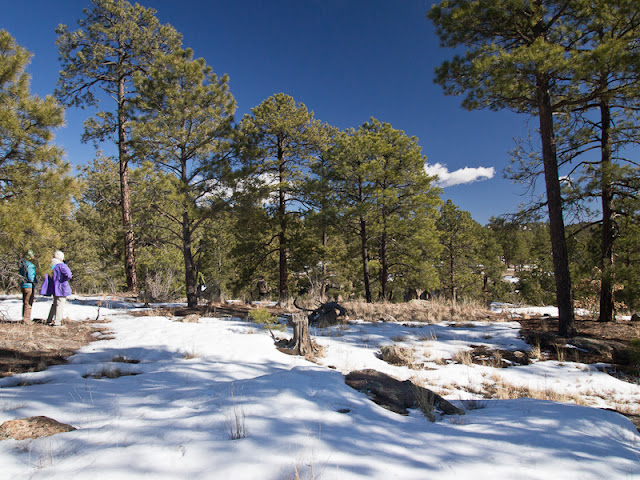 This is the tee area of Hole 17. I’m standing at the edge of what we think would be cleared; more or less all the visible trees from where I’m standing to the canyon rim (about 130 feet straight ahead) would be removed.

Update 1/26: Craig says: “The tee area for hole 17 is further to the south than I guessed, so fewer trees would have to be removed.” So some of the trees in this photo would go, but not all. 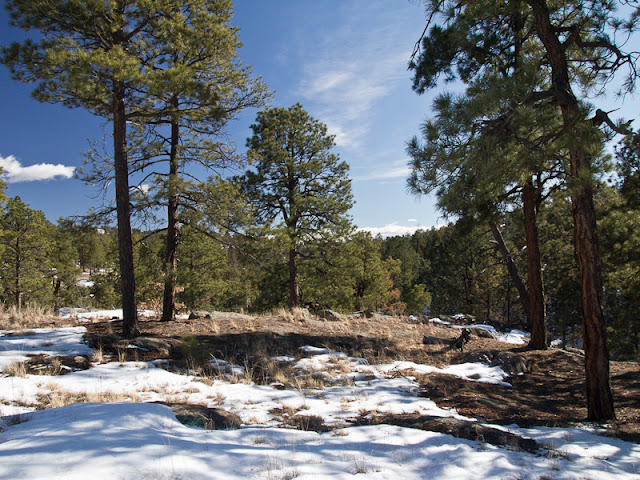 Same view point but angled more to the right. I think the two large trees at the right of the photo might be saved, but everything else between here and the rim would go, with perhaps less risk in the right 1/3 of the frame. 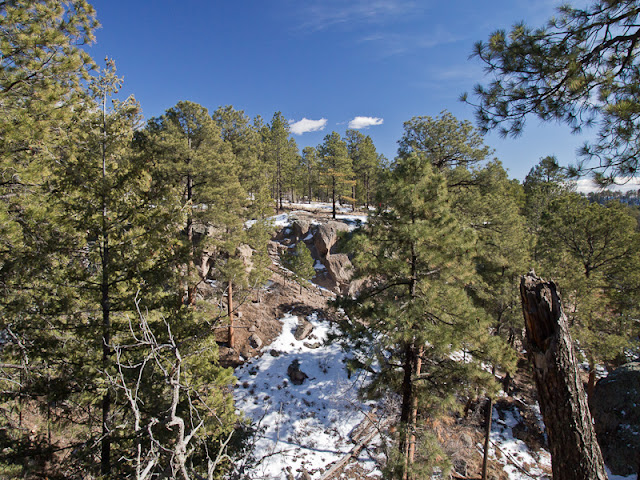 View from the tee area to the fairway on the other side of the canyon. It was unclear to us how many of the trees in the canyon would need to come down (the design team has proposed “topping” them, but any meaningful topping would kill the trees anyway).

Update 1/26: Branch removal would have a lighter touch than we thought; no trees in the canyon bottom are targeted for removal, and a couple would have branches removed but not enough to risk killing them. 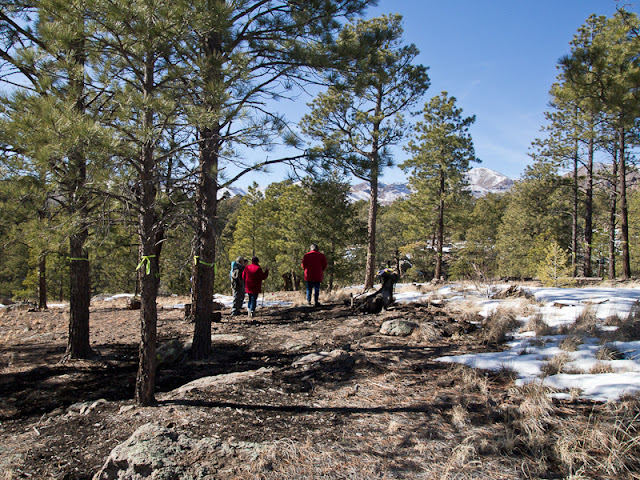 View from the fairway area of Hole 17. I believe more or less all the trees between here and the canyon rim would go, along with a few more outside the right side of the frame. 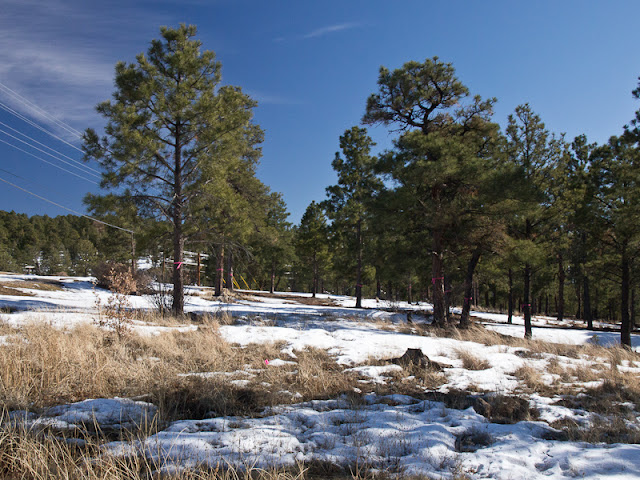 Finally, this is the proposed Hole 4 under Option 2. Trees with pink flags would go; basically, count four trees in along the first row of trees and extend something that wide down to where the power lines turn right (hard to see in this photo, unfortunately).

In no particular order:
As always, the county’s project page is here, and they are still accepting comments at cpfd@lacnm.us. Also, there’s another public meeting on Tuesday the 24th at 5:30pm in Fuller Lodge. Please attend and speak.
Posted by Reid at 6:50 PM